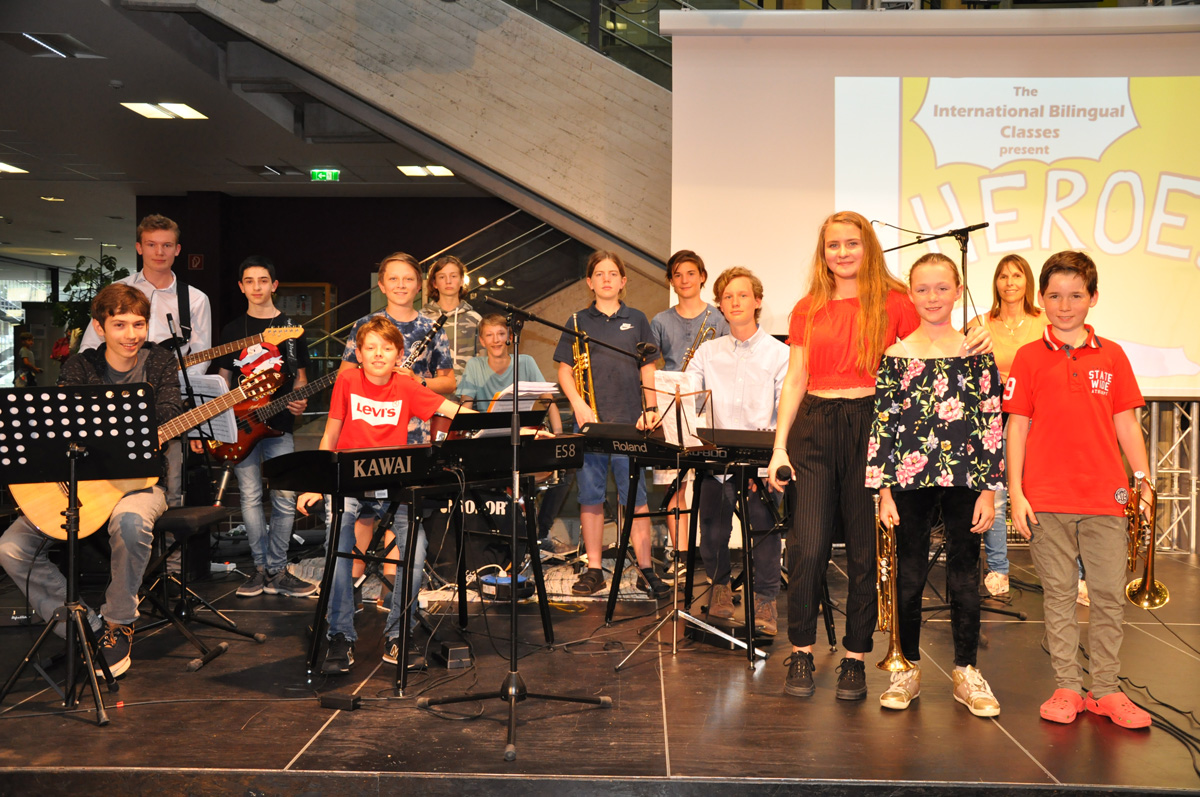 2018 was the year of the heroes! Eagerly awaited by all, large and small, the bilingual classes of St. Martin Gymnasium showcased their many talents on the stage and in the classrooms of the school. The evening began with an extremely polished performance of „Heroes“ by David Bowie by the Unterstufen band with Johanna on the mic!
Our bilingual coordinator Mag. Renate Wurm-Smole opened the proceedings by proudly welcoming everyone to the school, followed by Mag. Heimo Senger who spoke on behalf of our director, Mag. Roswitha Errath, who was unfortunately unable to attend our event. Finally Mag. Nicole Schojer, the representative speaking on behalf of Mayor Günther Albel, gave a welcome address to the school.
Armin and Adele from 2A began by introducing a choir of pupils from 1A, 1B, and 2A singing „Holding Out For A Hero“ and „Look For The Hero Inside Yourself“. The children asked themselves: “What is the most important characteristic of a true hero?” The inspiring answers were: daring, helpful, caring, brave, inspiring or selfless. To rousing applause, a few heroic members of their classes then abseiled down to the hall! Next, a funny and heart-warming sketch by the 2A showed that no matter what qualities a superhero can have, they also always have something negative about them (Robin Hood may give to the poor, but he is a thief). Finally, the 2A deduced that the people who will always love and protect you and never wish you any harm no matter what are your parents. Lovely! Nicolas presented the next sketch and film by the 2B, „At the court of Alexander the Great“. In a clever, competent manner, this heroic time period was brought alive by the students, who were all dressed in costume! TV Tennessee was an excellent opportunity for the 3A to highlight the importance of Martin Luther King and Malala from Pakistan, who we discovered in an interview was a true hero standing up to the Taliban. During this segment, we were asked to take part in an interactive quiz on our smartphones, which was won by the „Technik Team“ – so congratulations to them! 3B’s Everyday Heroes was a funny sketch about the question „to choose or not to choose“ when being a hero and choosing to save a frog from a mudslide. Very entertaining indeed! The evening schedule was then presented by Armin and Nicolas and the stage event was rounded off by the Unterstufen band singing a beautiful rendition of „Loving You Is Killing Me“.
Afterwards, everyone was invited to view the classroom and gym presentations as well as sample 6A’s delicious food and cakes. The textiles classes of 1A and 1B presented fantastic short films with their handmade puppets. These were extremely sweet and funny, so, well done everyone! Visitors were astounded by the workings of the heart, a biology and art collaboration by 7A, in an extremely informative, knowledgeable project with extraordinary sculptures. Heroes of Ancient Egypt were brought to life by 2A with a very enjoyable, interactive session of Kahoot as well. And there were real heroes, too, in the form of Rescue Dogs with their dog trainer, Kirsten Krassnitzer, from Villach, who so kindly agreed to present their work and also 2 of their dogs. So many thanks to her.
In our art department, 2B’s Comics on the Red Carpet were really eye-catching and showed their fantastic imaginations when creating their own heroes, while the 3B’s soapstone Animal Heroes highlighted the plight of numerous endangered species and looked great, too! Moving on to Physics Heroes. This was extremely informative and well-thought-out, with students telling visitors about different inventors. I learnt about Moritz Hermann von Jakobi and the 1st DC motor from Gianna, Jaira and Angelique from the 4A – so well done, girls!
The 5B film showing Robin Hood was an extremely well presented, professional contribution from the history department, which was in part funny, very well-filmed and acted out with great music, too. Moving on, Film vs. Reality by the 6CB music class, was very charming. Their performance of different superheroes was Oscar-worthy and very enjoyable. As was their filmed interview with Larissa Djomeni from Cameroon, who spoke about the importance of education for girls in her home country.
4A’s Heroes on the Dancefloor dance in the gym was excellently choreographed and well executed, and 4A, 5A and 5B’s Ninja Warrior Course proved a fantastic source of fun among the kids. Finally, there was a public vote on the first floor to determine the best proposal to find our local hero / heroine.
After the classroom presentations, a prize-winning ceremony was held. We would like to thank the IBC for sponsoring prizes for the Ninja Warrior Course. And the public voted for an extremely well-deserved „local“ heroine, our very own teacher, Mrs. Bauer. The evening came to a close with the Unterstufen band singing a rousing version of „What a feeling“! So, all in all, what did we learn: Heroes can be cool, clever, even comical – incredibly impressive or impressively awesome! All qualities presented by our students with performances that outdid all our expectations – but really it was the students, who were the true heroes of the hour!