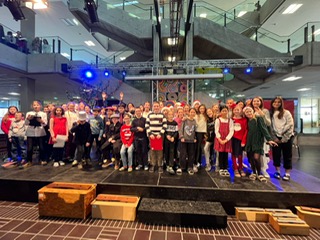 After a two year break due to Covid restrictions, the bilingual classes Christmas stage performance has returned. On 12th December the pupils of 1A and 1B entertained their parents, the headmistress and members of the IBCA board with a one hour long Christmas show.

The programme included two plays.The first one, called Christmas Letters, was set in a classroom and was all about a Christmas assignment.The second play was a simplified version of the Charles Dickens classic A Christmas Carol .The pupils, who had been rehearsing since October, were able to showcase their newly learnt English skills.

Mrs. Konnerth, the 1A and 1B music teacher, organised seasonal musical interludes.The well known carols Away in a manger and We Three Kings got the audience in the Christmas mood and musical pieces were played on the piano, French horn, recorder and xylophone.After the show the parents provided a delicious buffet which was enjoyed by cast and audience alike.

The next morning Weissenstein and Stadelbach primary schools were invited to St. Martin and 1A and 1B performed the full Christmas programme once more.

Native speaker and coordinator of the bilingual Christmas celebration