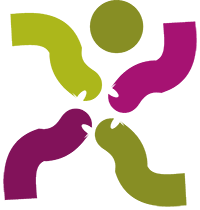 It all began with the concept of regional/international.  The International Bilingual Classes were confronted with this idea.  What could we make out of it?  The framework was broad, which gave everyone the freedom of interpretation.  The end result was an entertaining evening of sketches, music, dancing, presentations and films.The show kicked off, as always, with our youngest students.

The 1A/1B presented “Growing Together,” a mixture of various different media: a film and power point presentation about urban gardening and a trip to Regenbogenland, followed by singing and traditional and modern interpretations of Austrian folk dances. The 1A even served delicious snacks from their own self-grown vegetables.

Americans squared off against their posh-looking Britain contenders in the 2A/2B’s performance of “Two Nations Separated by a Common Language.”  Which English is correct? The songs “An Englishman in New York” and “Let’s Call the Whole Thing Off” led to the answer: both of course!

Our science stream class 3B interviewed scientists who are known for their significant contributions to the world in “Science Talk.” There was also a fantastic rap performance by one class member with a song he composed himself: a highlight! The 3A’s “Another Day in Paradise” sung with the accompaniment of musical instruments reminded us that homelessness is a problem everywhere in the world.

An excursion to the Zotter chocolate production facility in Styria was the basis of 4A’s contribution.  A self-made film and power point about Zotter’s regional and international aspects was enhanced by homemade chocolates from the chemistry lab and the “Chocolate Dance.” The 4B demonstrated with humor world travel without knowledge of other cultures in “Culture Clash.”

The upper forms presented themselves from the dramatic side: 5A wrote a fantasy sketch called the “Tower of Villach” which led a story through the years ending with Villach in the future.  The 6A performed the very entertaining “Home Sweet Home.”  It showed, through a combination of singing, dancing and storytelling the adventure of two young Austrians and their experiences travelling around the world only to discover that at home everything is always better!

The 7A Catholic instruction group’s project of “Our School’s Rich Diversity” researched the backgrounds of the student body and found at least 37 different nationalities!  The national flag from each of these countries is now decorating the main hall: a sensational addition to our school.

Finally, we would like to thank all the people who worked with so much enthusiasm to put this wonderful evening together.  All of the hard work, extra hours and creativity of the IBC team really paid off.  A special thanks also to the a cappella singing group LEWIKONOG Voicestra for their beautiful finale rounding off a very enjoyable and successful evening for the International Bilingual Classes.